"All miniatures are 28mm unless otherwise stated."

Among eBob's products is a series of miniatures for the Stalag Luft boardgame. The POW figures have potential as unarmed militiamen or civilians, while the specialist 'ferret' guards could possibly double up as BUF members.

"Ebor miniatures is a new company formed after thirty years of wargaming experience,our aim is to manufacture the highest quality historical miniatures at a very competitive price." 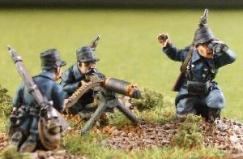 Ebor Miniatures aim to cover all aspects of the Belgian army in WW1, starting with early 1914 - a great source of figures for continental volunteers or militia fighters who like the shako look.

EM-4 produces a range of 25mm Call of Cthulhu-inspired miniatures called Dunwich Detectives. Certain male and female adventurers, cops and gangsters could possibly be rescued from the clutches of the Great Old Ones to join the ranks of VBCW militias. Any budding fascist leader should also take a look at the Cops section of their Future Skirmish range if they're after a tinpot dictator figure.

Figure painter Emil Horky has commissioned a number of pre-war Czech infantry figures, which could double for helmeted BUF infantry or foreign volunteers and are available for order on his website.

"Welcome to an eclectic range of 28mm figures and a 6mm Sci-Fi range."

EMP Games has a couple of packs of WW1 Australian Light Horse which could be of use (as dismounted yeomanry for example) to the VBCW gamer.

"28mm Figures and rules for wargamers and collectors."

In addition to their Zulu and Abyssinian lines, Empress also sell Anglican Miniatures' Spanish Civil War range. A great many of these figures are suitable for crossing the Bay of Biscay to join the fighting in Britain's civil war: Nationalist troops could be used in Royalist/Fascist forces whilst Republican militias and International Brigade fighters could join the struggle with their Anglican and left-wing contemporaries for example.

One particular favourite among VBCW players are Empresses Assault Guard figures, which are often used to portray armed municipal workers such as bus drivers, or, following a headswap with Zulu War British infantry thanks to their separate heads system, armed policemen. 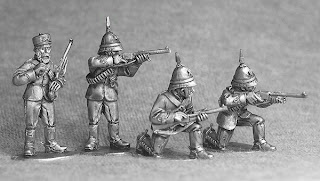 Suitable figures can also be found within Empress' Zulu War range, including various auxiliary cavalry types and some mounted and dismounted Boers for police and civilian units respectively.

Empress have also released a pack of interwar drivers, scaled to the Matchbox Models of Yesteryear range.

Their Jazz Age Imperialism range also has lots of VBCW potential if you wish to field regular British troops, just returned from the far-flung corners of the Empire, with kilted Highlanders in Wolseley helmets!

Eureka Miniatures produce a wide range of miniatures of varying scales. Among their 28mm output are a number of ranges that can be trawled for VBCW-friendly figures, especially their George Formby figure! The Civilians and Vignettes line includes some Victorian gentlemen, thugs and 1920's women - all of which could be used in some form or other.

Their WW1 range boasts some British troops in Palestine, Ghurkhas and Russians (including a three horse Tachanka that would look fantastic rattling along Britain's country lanes!)

Eureka's Pax Limpopo range is also worth a look, if only for the sheer daftness of the figures! No VBCW faction is complete without an anarchist nanny or an armoured penny farthing (although most players will probably content themselves with their bicycles instead).

Fantasy Flight Games produces a range of pre-painted miniatures to replace the investigator markers in their Arkham Horrors board game, which could possibly be useful as VBCW figures.

"Figures are 28mm eye-to-foot; Vehicles are modelled to 1/56th except where shown."

In addition to their interwar vehicles, Force of Arms produces a range of Spanish Civil War infantry which could be co-opted into your VBCW armies.

Please note that Force of Arms has currently suspended trading.

"Here at Footsore Miniatures we pride ourselves in providing the gamer and collector with only the highest quality 28mm figures."

The Daddy of all VBCW-friendly manufacturers!

Footsore's VBCW output is continually growing alongside the 'period's' popularity, with armed vicars, militia bombers and BUF Vickers HMG teams joining the ranks and the certain promise of more to come. (Look out for the chap in roller skates and flying helmet too.)

Completing Footsore's interwar range are a number of figure packs representing the Irish Wars of Independence. Their IRA flying column miniatures are great for civilian militia, the Royal Irish Constabulary for British policemen and the Black and Tans for auxiliary British militia.

Forgotten And Glorious Company of Art 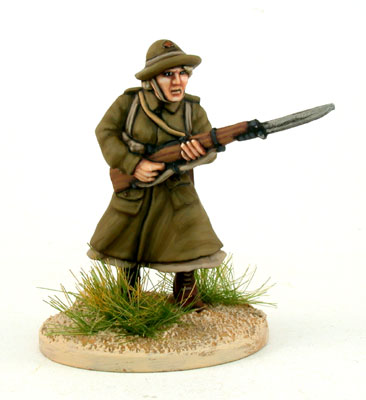 Forgotten Front Miniatures have some useful figures in their Great War of the Worlds range. Among the Human Coalition can be found some handy female fighters in the form of the British Pankhurst and the Russian Womens' Death Battalions.

These figures can also be found in their Setting The East Ablaze 1914 - 1930 range, which boasts various VBCW-friendly miniatures, including Highlanders, Russians, Czechs and Annamites.

"...just think of us as "gamers", or if even that doesn't make sense to you then substitute "geek" for "frother" in each sentence and thats probably all you need to know."

(In)famous gaming forum Frothers Unite-UK sells a small number of miniatures, including the svelte form of Colonel Marbles - an unarmed gentleman of distinction who would add a sense of gravitas to any VBCW tabletop encounter.